Dahlias - the correct landing and care. 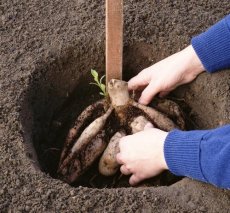 So the deep or shallow planting of dahlias does not matter. But if the tuber of the flower of the dahlia already sprouted, then we plant it on what convenient depth, you can even cover the germinating sprout plants, in the soil, later the roots are formed along its entire height. But if the planting of dahlias is high, they will be damaged by autumn frosts.

Dahlias require additional care and cultivation operations these colors. Mandatory garter of dahlias to the peg. Experienced growers advise first to put a peg, and then plant dahlias. Why now all have switched to cultivation of dahlias of seed forms, because they are low, stakes are not needed for them. But 2 meters tall dahlias grown from tubers, what other flowers can reach such heights, need a backup. Beautiful look giants flowers in combination with a forged metal fence or original stakes, performing the function of supporting plants.

To tie dahlias is necessary when the stems of the flower reach 50-60 cm, the stakes need not be high, 1 m is enough. It is possible to use metal structures and special flower supports to help the plant bush to not break the wind and its weight in the form of poles for dahlias. Garter dolly can be done both single and common. First make a single garter of flowers with a long stem, tied in 2 places.

Do you need pruning dahlias?

How to regulate the number of shoots on the plant. Pruning dahlias is needed, as soon as you planted dahlias and they started, they started growing, then you need to leave a maximum of 3-4 good strong shoots on the flower bush. This refers to tall tall dahlia bushes. A large number of sprouts from a plant bush tells us about a large planted tuber of a flower tuber, it was not divided, so each sprout tends to grow.

Pinching dahlias - removing lateral shoots. The first trimming of flowers is what is removed from tomatoes - side pasynkovanie, done at a height of 40 cm. While the dahlia grows to a height of 40 cm, you need to remove all lateral shoots, and after the desired height, they already grow freely and we do not touch them. The growth of shoots of dahlias is self-regulating and the number of flowering blossoms depends on the number of shoots.

Why did dahlias become forgotten in our garden plots? 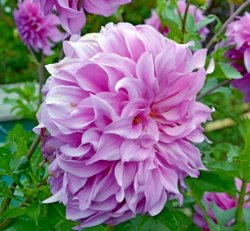 In Europe, dahlias are very popular, although they are called somewhat differently. The main reason is that in due time dahlias were one of the main cut cultures. Cut these flowers by September 1 bouquets of dahlias, and now because a lot of roses and other cuttings floral plants, then the need for growing dahlias has disappeared. And most importantly, they need to be dug out and put on for storage annually. This is inconvenient and many florists abandoned them.

The beautiful and massive flowering of the dahlia comes in September. If you live outside the city, then plant 5-6 bush dahlias, that would have such a luxurious flower in the fall. Autumn is rich in bright flowers, asters, chrysanthemums, but dahlias are beyond competition, these plants are in the first place among all autumn colors in their abundance, variety of shapes and colors.

Probably dahlias from tubers are not grown, unnecessarily there are seed varieties of these flowers. Why suffer with the storage of tubers of dahlias if you can sow seeds and get also flowering flowers. All this can be done, but if you plant a tuber of dahlias it is already 100% that you will have a beautiful and huge plant flower. Such flowers grow from a tuber placed in the palm of your hand, up to 2 meters high.

When should you buy dahlias for planting?

In autumn, you can not buy planting material of dahlias, it is very problematic and difficult to store tubers, so the purchase of flowers must be done in the spring. To buy rootstock dahlias to begin it is necessary since February, them at this time bring in shops. When buying tubers of dahlias, be careful and look at the state of the tuber, dry, dried forms of planting tubers of flowers Do not take, they will not grow. Determine the weight of the tuber, if the weight is felt in your hand and the general condition is normal then boldly buy.

The tubers of dahlias. 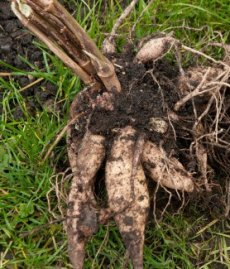 The dahlia on the tubers has only the upper eye of the mix of the tuber itself with the stem, here there may be a sprout which will give in the future a beautiful dahlia flower. If we divide the flower in the division of a flower tuber and we have one root without a kidney at the top, then most likely none of this part of the dahlia tuber will grow, it is not a potato from any part of the tuber these flowers do not grow.

If you bought dyevyanki flowers dahlias in the winter or purchased them in early spring, then by the time of planting dahlias in the soil of tubers plants need to take care at home in a natural climate. They lie in a deep plate of water or use moist peat, and the planting tubers of dahlias gradually sprout. The main thing is that the roots of the plant are in moisture, and the upper part is dry. After the appearance of the sprout on the tuber, it can be sprinkled with the soil to half.

If the sprout from the tuber of dahlias went intensively in growth, then it should be sprinkled with earth, and get two dahlias from one plant, cutting off the top of the grown sprout and scratching it. In general, you do not need to rush to plant a purchased dahlia, even if the shoot grows faster, it's easier to cut a stalk with 2 internodes, root it in sand or soil, and for the rest of the dahlia tuber it is not harmful, then from each top kidney will begin to germinate rostochki - it's even good to go to the root of the future dahlia, thereby forming it.

Dahlina is a thermophilic culture. And therefore plant flowers in early June, you can certainly plant tubers before, greenhouses, hothouses, hydrotextiles. If you do not want to mess with the early growing of the dahlias then we plant in early June and cover for a week to adapt flowering plant. And given that in the region there are always recurrent frosts until June 10, then you need to follow all this business and look at the weather. 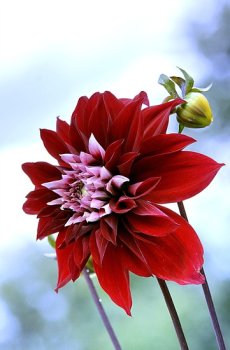 Most experts on perennials have a negative attitude to fertilizers, it is better to fill the soil with flowers of dahlias during planting, and this will be enough for plants.

There are several techniques of growing dahlias: When dahlias are grown by cuttings, then of course you want them to grow up and give a flower mass.

Then they can be fertilized in the first half of the summer with manure, fertilizer slurry has a very positive effect on dahlias, and they are not afraid of over-fertilization like asters and roses.

Flowers of dahlias immediately respond to fertilizers (any nitrogen).

The only thing to remember is that for any flower crops and for dahlias, to produce fertilizer in the first half of summer until mid-July, Further, any kinds of fertilizers are already excluded.

Very good dahlias grow when added to the soil of the overgrazed manure and in general these flowers like fertile soil, light, grow well on the sand, because in the presence of manure they grow larger and larger will be tubers and larger leaves. Dahlias will bloom necessarily, this is the flower that you planted in the spring, and in the autumn it will bloom in you. They are the longest flowers in the garden, these flowers bloom before the winter, so you need to dig them after the first frost, when the foliage on the plant turns black. Previously, it is undesirable to dig out, that flowers successfully completed the process of vegetation and there was an outflow of nutrients to the flower tuber.

After freezing, the dahlia is cut off, leaving a 15 cm stem and very gently, gently dig out the root tubers and put them on for 1-2 days to dry out. Water wash the root is not recommended. You also do not need to divide the dahlia tuber in the fall. Store dahlia tubers in a box of paper covered with dry sawdust at 0 + 10 degrees. An important point before laying the tubers of dahlias for storage is to dry them well.

During storage, the dahlia tubers are examined and checked for rot from the abundant fertilizer with nitrogen, the unburned stem may become moldy. Do not rush to throw out the damaged root tubers of dahlias, remove the diseased part to a healthy tissue and treat this place with potassium permanganate.

What we do in the spring with tubers dahlias.

It all depends on what you wake up with them. If you simply just plant flowers on the site and have the opportunity to plant, then in late March you need to get the tubers, look, clean and divide into the villages. You can plant and not divided tubers dahlias, but it is better to divide. The standard unit of planting dahlia is: 3 tubers and a root neck with kidneys. If a very large tuber of flowers, then they need to be cut in the fall.