Autumn is the time of flowering chrysanthemums, and at the same time in the markets there are many flowers of chrysanthemum, i.e. excavated blooming flowers and offered to us for planting in our garden, at the cottage. It is better to plant chrysanthemum in spring somewhere from June 1-10. 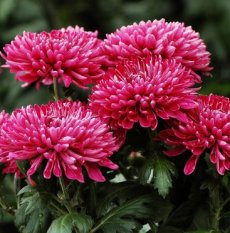 Soils for chrysanthemum are better loamy with the addition of leaf humus. Compost, too, under the flowers can be made in the fall, dig with the soil that you have.

And then it will be useful for the chrysanthemum flowers, but the compost should be 3 year old and well-repaired organic fertilizer.

Manure with sawdust - not suitable as an improvement of the soil to chrysanthemums. Reparted manure can come in colors if it is well bred in its pure form without hay, straw, sawdust.

When planting chrysanthemum, the planting pit should be 2 cm larger than the planted seedlings. The root neck of the flower is located at the soil level, do not strongly bury the flowers, or it will rot.

Cuttings of chrysanthemum can be carried out in winter, if there are suitable conditions with an air temperature of +16 +18 degrees and additional illumination 15 hours a day. More successfully cuttings of the flower root in May-April in a greenhouse, as a substrate, you can use a mixture of sand and peat.

How many years in one place can grow chrysanthemum flowers?
How often should flowers be divided and updated?

2-3 years. And the plant changes its place after 3 years. The flower can be a little away from the landing site. This is due to the stem-shaped shoots that will give the planting material. And this is the signal from the chrysanthemum, the flower shows that it's time to transplant to another place. If you continue to grow chrysanthemum to 5 years or longer in one place, it becomes less decorative, the flowers become smaller, the leaves also grow smaller, and the flower loses its attractiveness qualities. 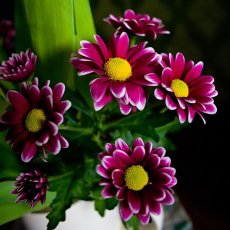 Chrysanthemums have time to bloom, please us with their flowering, in contrast to late varieties whose flowers bloom late. The late chrysanthemum is all in buds and does not bloom and all the beauty of the flower has remained undisclosed. Even more important is where the plant was brought from, the flower planting material. For example, from Belorussia, Kaluga, Tula, the most acceptable and zoned varieties of chrysanthemums.

How many varieties of chrysanthemum are suitable for growing?

Where to plant chrysanthemum flowers.

Sprawling chrysanthemum bushes can be planted in a mixborder or in a group, compact flowers of small diameter plant better on a flower bed or a curb. There are high border grades of chrysanthemums - they are column-shaped bushes, they form the right form in a curb.

Sliced varieties - there are several varieties that have time to blossom under our conditions: elena, palivo, alenka.

From the Nikitsky Botanical Garden, the early varieties of chrysanthemum will suit our territory, they will have time to blossom and we will see all the beauty of the flower. 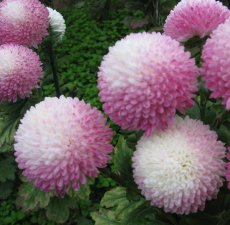 Chrysanthemum is specially designed for growing on the open ground and care for it is needed. In the autumn very often from the Crimea, Yalta is brought to us Indian chrysanthemums are very large. These Indian flowers can not hibernate here, only some of these chrysanthemums. Chrysanthemum is an annual culture.

In northern regions, chrysanthemum can be grown on heated terraces. White large caps of chrysanthemums are large-flowered and greenhouse flowers. These Indian chrysanthemums care for them are difficult and problematic to grow, they are very difficult to take roots from the stems with a flower, if you try to root that very rarely when it turns out.

Chrysanthemum's queen cells must be dug for storage in the middle or the end of September. Having dug flowers with a large clod of earth, it is necessary to cut off the aboveground part of the plant and put it in storage in the basement. Flowers in the dark can be found and stored until the end of February at +6 +8 degrees, if there is +4 +2 nothing to worry about, for stored chrysanthemum flowers.

Chrysanthemums are deposited in crates for storage, and then put in the basement, the main thing is that it does not freeze. Care of flowers during this period needs minimal. Watering the queen cells of flowers lying in the basement in storage should be rarely, only so that they do not dry out once a month.

For a lush blossom chrysanthemum requires a rich nutrient soil.   In the planting pit of the flower, you need to add fertilizers: compost or peat. To fertilize chrysanthemums respond well, especially like organic. If annual flowers need to pay attention to soil fertilizer for flowers. Organic soil additives such as humus are very suitable for plants.

In autumn, under bushes with chrysanthemums, phosphorus fertilizers should be applied to the soil, superphosphates are used for this. And in the summer it is possible not to feed phosphorus with phosphorus, but to fertilize chrysanthemums with ammonium nitrate at the end of June, but this depends on the variety of chrysanthemums when it is fed.

In the period of flower budding, potassium-phosphorus fertilizers are used, if you have not made phosphorus. And during the germination of the flower with nitrogen fertilizers, as their urea, ammonium nitrate, potassium sulfate is very good during the formation of buds near the flowers of chrysanthemum.

Before planting, the chrysanthemums that we grow in the shrub form are not cuttings, we can make a single prischipku.   flowers is done in the seedling season when it is not yet planted in the open ground. The stem grows in a glass and you need to pinch the point of growth of the flower, this is the very tip.

On the cutoff varieties of flowers, the formation of the plant, the pinching of the buds and the stepsons with a pin is needed. Chrysanthemum of bush forms is subject to 1-2 pinching. The first prischipka in the greenhouse period, the second in 10 days after landing in the open ground. With cuttings of chrysanthemum in March, you can make 2 pinches.