How to breed and grow Echinacea?

Echinacea purpurea is a gift of nature, which includes both healing power, beauty and, I would say, complaisance of character. It does not require any special care in one place grows five to six years, and multiplies and seeds and green cuttings, and the division of the bush. 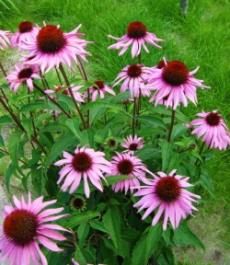 Just now it's time to take care of growing purple echinacea. It blooms all summer, the seeds ripen unevenly and they should be collected as soon as they are ready. And after the individual stems on the bush have already blossomed, you can propagate with green cuttings.

If you can not do this at the end of August or the beginning of September, then postpone it until the spring, after cutting in May before flowering.   A shrub for propagation is recommended for a two- or three-year-old plant.    Doing this simple agrotechnical technique, you should be careful that the roots remain intact. Unfortunately, shared bushes can be ill for a long time.

Of course, most plants will be obtained by multiplying seeds. Having prepared them now, begin the main works on growing in the spring. You can sow directly in the open ground. They will rush for a long time - a month or more, will appear very unfriendly. True, if before that, soak them for a couple of days in warm water,   periodically changing it, the process can be accelerated.

When individual seeds proklyutsya, it's time to sow. On seedlings, seeds should be planted early in spring - in March.   Spread them in a box with the earth to a depth of 0.5-1 centimeter. Make sure that small and defenseless shoots on the window do not burn the sun, and the earth is moderately moist. Echinacea purpurea does not tolerate a strong overmoistening, but it also refers to a lack of moisture badly.

In the first year, single Echinacea plants bloom, and even closer to the end of the summer season or early in the autumn. However, plants from seedlings bloom in the majority, but in the first year of them there is one flower per bush. In general, the first year is considered to be the time for sprouting.

The best place for living Echinacea purpurea is a sunny area with a light, well-fertilized soil. Choose it from the autumn, having cleared of perennial: weeds, such as wheatgrass, sow or dandelion. They greatly complicate the development of Echinacea in its first year.

Care of Echinacea purpurea usual: weeding, loosening, watering. Ochen she likes a drop shower, spraying with water, in the summer sun-scorching period,   in the evening. After such a shower in the morning look at her: it's fresh, renewed. To Echinacea was beautiful, cut the dried flowers. In the beginning of autumn, it would be nice to feed the infusion of mullein.

Before freezing, look to see if the roots have come out. In this case, they should be bored, so that they do not freeze in winter. Do not be surprised if in the second year Echinacea begins to grow back rather late - in May. This is normal for her. 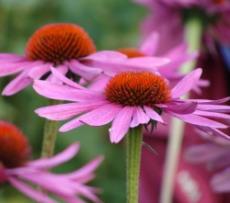 I received many letters from readers who were interested in this plant and improved their health through it. Answering readers' questions, I will tell you more about Echinacea. Her homeland is the prairies of the eastern part of America. There, this plant has long been used in medicine. At the turn of the nineteenth and twentieth centuries, its medicinal properties reached European medicine.   In Germany, data were published on the chemical composition of Echinacea, and then the production of preparations began.

Now they are in our pharmacies, it's immune, tincture and candy from Echinacea, as well as others. This plant was known only to specialists, and a wide interest in it arose after the Chernobyl tragedy. Preparations from Echinacea are used for various pathological conditions, have a therapeutic and stimulating effect on the immune system.

They are used for diseases of the genitourinary system, upper respiratory tract, colds, for healing and healing of large wound surfaces. Extracts of echinacea suspend and stop the growth and development of streptococcus, influenza virus, staphylococcus herpes, stomatitis of Escherichia coli.

Medicinal properties are possessed by all parts of the echinacea-root, flowers, leaves.   It is a powerful natural stimulant of the immune system, which according to its data can compete with the famous ginseng. But unlike him, Echinacea is simple in growing.

True, the question of which year of planting it is suitable for treatment remains open. According to various studies, including the All-Russian Institute of Medicinal and Aromatic Substances,   the most healing properties it acquires by the third year of cultivation. the best quality in a one-year-old root system, if echinacea is grown by seedlings and on a high agrophysic.

Echinacea is a perennial plant. Bred by reproduction with the help of seeds and separation to a part of the bush, well tolerates the transplant. She is light-loving, relatively thermophilic, to the soil is undemanding. Seeds should be planted in the soil on the eve of winter (November) or in the spring, at the beginning of May, planting them for one to two centimeters with intervals in the rows and between the grasses 50 cm. Caring for echinacea is simple this loosening and watering as the soil dries up , poor soils can only be fertilized with organic fertilizers.

Spring at a temperature of 20 degrees for about 10 days germinates about 80 percent of the seeds, with plus 15 degrees - only 60 percent. Under adverse weather conditions, sowing directly into the open ground can produce "dead shoots". Therefore, if the seeds are small, it is better not to risk and grow seedlings first. You can do it this way.

In early April, put a gauze in a flat plate and moisten it with melt water.   On the wet gauze, evenly spread the seeds, cover the top another plate and put in a warm place with a temperature of at least 18 degrees, moisturizing for a week gauze melt water.

Then in the plastic boxes (you can, for example, from different products) pour the soil mixture, taking equal proportions of sand, chernozem and humus, gently move the seeds here (some of them I can already proklyutsya) and sprinkle a small layer of earth. Well watering the soil, wrap the box in a plastic bag so, so as not to evaporate the moisture and over the top of the box were a few centimeters for the growth of seeded seeds.

In a warm place, let the crops stand until the bulk of the seeds germinate. After this, the package should be removed and the seedlings should be grown in the usual way. In the open ground it can be transplanted after May 20.   On a good agrophone Echinacea grows to a height of 150 cm.   The most powerful plants bloom already in the first year of planting, and massively - from the second year. 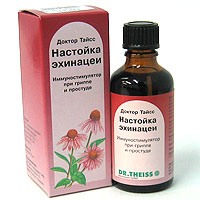 How to prepare spirituous infusion of echinacea purpurea?
Does it increase blood pressure?

Echinacea purpurea has contraindications.   Its drugs do not need to be taken: when the disease progresses, systemic diseases: tuberculosis, multiple sclerosis, leukemia, collagenosis, hypersensitivity, as well as during pregnancy or breastfeeding, should be treated with caution in diabetes.   Alcohol tinctures are contraindicated in children. Possible side effects - allergic reactions, nausea, stool, insomnia.

There are also disputes about the duration of application. Experts often recommend drinking Echinacea preparations for 15-20 days.  In any case, they are prescribed individually, and you should first consult your doctor about the method and dose of application. Tincture of flowers Echinacea is prepared in a proportion of 1:10. One part of the inflorescence should be filled with ten parts of vodka, insisting 15 days in a dark place. In the same ratio, insisting 2 weeks in a dark place,  you can make a tincture of dry crushed roots on 70% alcohol or vodka. In addition, tinctures of Echinacea are freely sold in pharmacies.