Photo of flowers of tulips.

Frankly: the flowers of tulips and photos, which I first saw in the Artyomovsk nursery at the age of ten, are not at all similar to the splendor that is today encountered at every step. Then basically they were red, occasionally yellow and very rarely red terry. True, they smelled amazingly - very subtle, exciting ...

For half a century, since then, our knowledge in this kind of bulbous has grown so much that to say - as if there are thousands of varieties and varieties today - do not say anything.

But first a little information from the history of this tulip flower, drawn from a brochure with a picture published three years ago by the Kiev magazine "Kvity Ukrainy".

A group of authors, including famous florists T. Dontsova, I. Demchenko, M. Chernetska and many others, described in detail and colorfully tulips and took photographs from the 15th century to the present day. In 1554, the envoy of the Austrian emperor in Constantinople, Ogier de Busbeck, saw in the garden of the Turkish sultan unknown flowers that amazed him with refinement and beauty. He bought a batch of tulips and brought them to Vienna. So these flowers first came to Europe.

But then they were pretty much the same type of Persian "turban", because in form it resembles this headdress. Both in Persia and in Turkey, there were festivals of tulips. Folk festivals, flower shows, houses and whole streets, decorated with tulips ...

Soon the victorious procession of them across Europe begins: Austria, Germany, France, Switzerland. And soon the director of the Vienna Botanical Garden, Clusius brought tulips to Holland, where the real "golden tulip fever" began. For one onion rare varieties can be bought a huge house, a herd of horses, land.

Since then, centuries have passed, the "sick" have recovered, the prices for these flowers have become reasonable, but their popularity remains very large. And today there is no such dacha site on which in May the whole beds would not be covered ...

But, thank God, the fashion for typical Dutch tulips - up to a meter tall, with huge fifteen centimeters glasses - passed, and curious lachozolotoy border, blue and lilac, fimbriated, lilicolor. What do you need to know a simple trucker? That all modern tulips are divided into 15 classes, and all classes are united into four large groups.

The most common types of tulips.

The most common tulips: simple early, low, medium, bloom in mid-April. Amazing in beauty terry early, from a distance similar in shape to roses or peonies. The most common class of tulips is Triumph, blooming immediately after simple early ones. Behind them - Darwin's hybrid. Then there are exotic: lily-colored, parrot, fimbriated. 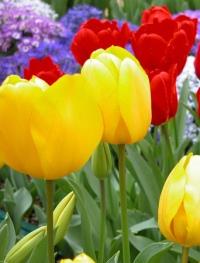 But the true lover and connoisseur will necessarily include in the collection the so-called species, botanical tulips, which bloom after the melting of snow. This year, despite late spring, already in March, on some thawed patches, red, with a wide golden rim of Stresa, and next to it was the same, but with a white border of Delaucluse.

An unforgettable impression is left by Red Reading Hood tulips with wide dark leaves covered with dark red longitudinal strips. They are beautiful not only flowers, but the leaves of their photos can be seen on the Internet.

Of the modern lily-colored tulips, I will mention Aladdin with a huge scarlet bowl that opens after all other groups have faded. They look especially unusual next to the brown-gold Abu Hassan.

At one time, I laid out for the two bulbs of this exotic tulip a very decent amount, as, incidentally, for the black Queen of Knight. Despite all the tricks of care, they never multiplied in my garden, like most parrots and fimbrates.

And only today, after many years, I realized why they are called rare tulips: because they reproduce poorly. And yet few will abandon the motley Estella Reinveld or the lily-colored Mona Lisa. But quickly, excellently multiply terry pale pink Angelica and blood-red, large, like peonies, Red Queen. From the same series, Herbrandt Kif is a huge scarlet bowl that is bordered by a clean-white narrow Stripe, yellow and red Nice.

I do not write much about planting and caring for tulips, because I do not know a more unpretentious flower. It is enough to plant them once in autumn at a depth of three sizes of the bulb, and they will bloom annually. But some varieties form stolons, and with them go to great depth, which worsens the flowering.

Therefore it is recommended to dig them out every two or three years in the summer,   as soon as the leaves begin to turn yellow, and store under a canopy until the fall, and then land again. But if you are late with the landing, nothing terrible will happen.

Last fall, I left some bulbs and their babies in an open box in a cold barn because of illness, and in spring all of them, from small to large, sprouted and, planted in the ground, set out to catch up with their sisters.

Of pests, they are only damaged by a bear and a wireworm, and the most dangerous disease is the variegation of tulips. If the virus has infected at least one tulip, write was gone. The entire collection will necessarily be lost.

We must immediately dig out all the sick tulips and burn them, and disinfect the earth. True, new varieties are almost not sick, and parrot motley have a "battle" coloring: on a red background white or yellow fancy stripes.

But an experienced eye can easily distinguish stripes on parrot tulips from stains on patients: in the first they are placed in the form of patterns, and in patients - formless. In addition, patients with tulips, small bulbs and delicate flabby stems. Unfortunately, even bees can carry this virus.

Danger and fusariosis is a withering disease, or a black wilt. It occurs in hot weather with abundant watering and high humidity. Still tulips can be ill with gray rot and homoza, which is the result of excessive watering in cold weather.