I have a rather rare and interesting flower - eucomis.   Tell us, please, how to create the best conditions for its growth, how to multiply it.

You are right, this native of southern Africa is known to us not very long ago.   It is also called the pineapple plant, because in its flowering form it looks like pineapple.

Eucomis is considered to be an indoor flower, but in the summer it, of course, better to transplant somewhere on a sunny patch in the garden, the landing site must be low-blown. He will thank for this the formation of a large bulb with children.

Such children should be propagated in March-April. At this time, they should not be planted in the open pound, but in pots, which must be kept in bright light. The tip of the bulb should be at the level of the soil mixture consisting of an equal proportion of humus, turf and sand.

The first leaves will be long - up to 60 centimeters, which means that it takes a lot of eucomisu, especially since it grows quite quickly and puts out an inflorescence of 30 cm in length.   But for a long time in the room conditions it is not necessary to detain it, with the onset of summer it should be moved either to the open ground or to the balcony, from the beginning of the appearance of the leaves and until the end of the summer two or three additional fertilizing with mineral fertilizers is required. 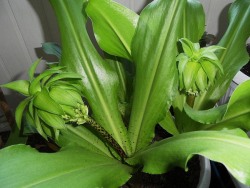 In autumn a period of deep peace begins. From this time, when the leaves turn yellow, and until the spring watering eucomisu is not needed. The bulb can, as you did, put in a refrigerator with a temperature of plus 10 degrees, but at the same time fill it with sand or peat.

And you can keep it in a cool place in the pot, not watering until the very spring. In March, it will need to be transplanted into a new soil mixture, since the former is quite depleted. Watering at the beginning of a new season for the plant must be carefully, without excessive moisture.   In the summer, it loves copious watering. Water clean is not permanent.