How to grow Ricinus communis.

Please tell us about Ricinus.
She became very fashionable with us.   Many people want to grow castor oil, but it is poisonous ... 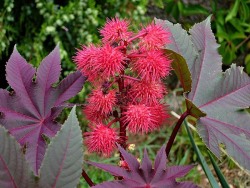 When you first see this plant, it strikes the imagination.   It does not leave a sense of celebration and romance and with a "second" look.

Ricinus communis - tall, slender, with large finger-separate leaves resembling palm trees, it is exotic and unusually elegant next to the garden house in our gardens.

This plant refers to the family of euphorbia and appeared in us from North-East Africa. There and in other warm latitudes, it is grown to obtain medicinal seeds, from them a very popular castor oil is squeezed out. The medicinal plant has another name - castor oil, castor beans and the palm of Christ. We also cultivate it as an ornamental plant.

Poisonous in the plant; are, seeds. In literature, it is even emphasized that they are very poisonous. So, for an adult person, a deadly dose can already be 20 seeds,   and for a child - only six. Deadly influence ricin - oil - a substance present in their composition.

Its size Ricinus L resembles a tree.   In fact, it is a herbaceous perennial with a lignified stem below the stem. Because of its passion for warmth, it grows in our one-year culture. But its tall varieties manage to grow to 2.5-4 meters in two or three months. Some of them have very effective color of leaves, stems.

So, for example, in the Red Spire variety, the leaves have a bronze outflow,   the stems are red. In other varieties, green leaves may be a reddish hue or a gray-green color.   In a word, beauty. Any variety of this plant; grows well in the south and north. True, the more north it "step", the more difficult it is to deal with.

Specialists are strongly advised to do cultivation of castor oil through seedlings, sowing in March 1-2 seeds in a pot.   You can take another container, in diameter more than 9 cm: then the plants are easily removed when transplanting.

Before the germination of the seeds, the pot must be kept warm.   In general, castor oil seedlings should be grown at + 18 + 20 degrees, not lower! On a permanent place it is recommended to plant it, after a threat of return of frosts, i.e. in the final stage of May. If, for some reason, you decide not to engage in seedlings, but to sow seeds directly into the open ground, then it will be necessary (depending on the weather) somewhere in the third decade of April-mid-May. But in this case, Ricinus communis can manifest itself in late July - early August.

Like any heat-loving plant, it prefers sunny, cozy, well-warmed areas.   And the cultivation of castor oil should be on nutrient soils and timely watering is needed. Then it will develop well and beautify your garden.